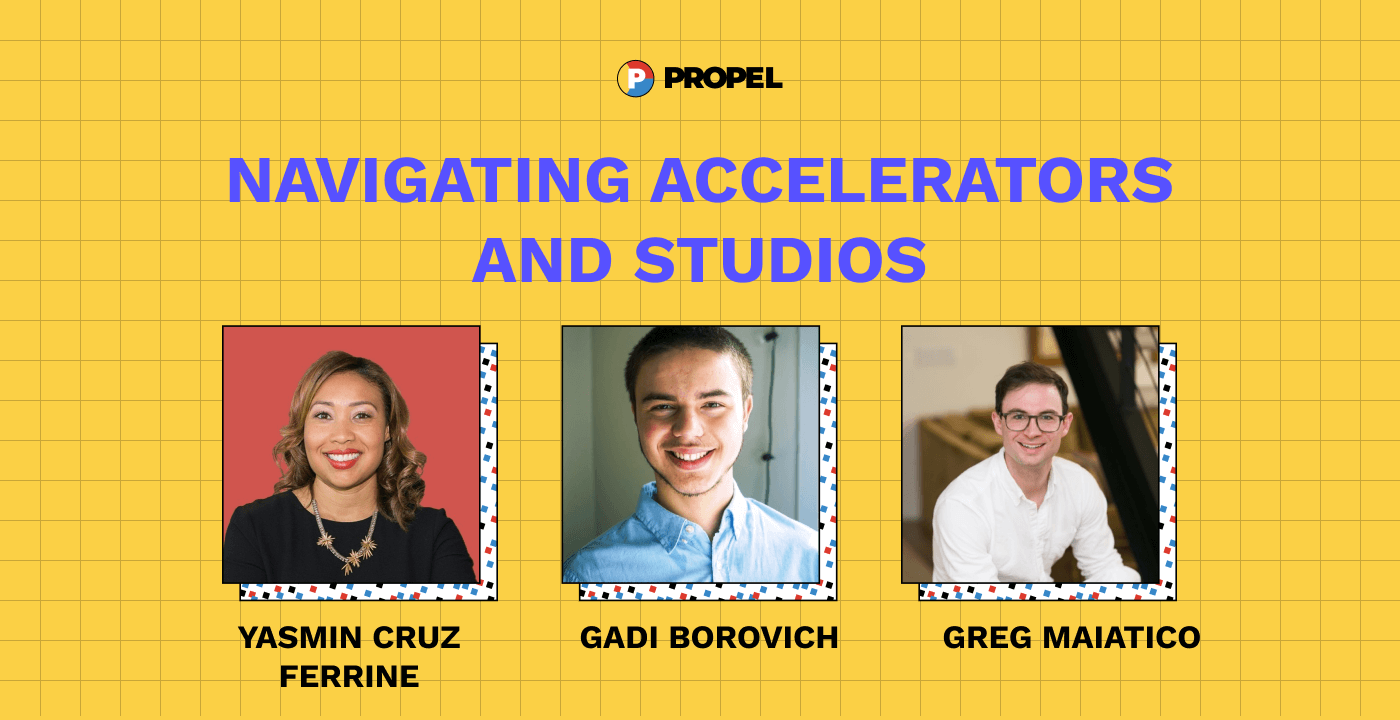 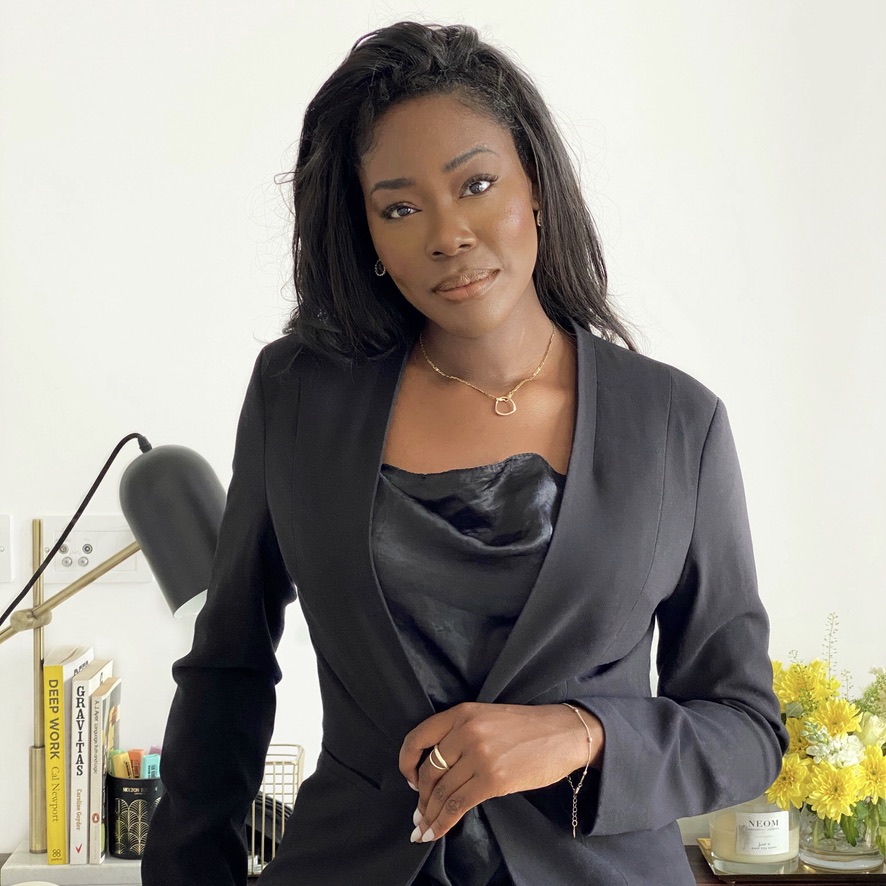 At the earliest stages of your idea and entrepreneurial journey, there is support. But who exactly offers it? What does that support look like? Is it the right kind of opportunity for you? To answer these questions, we spoke with three leaders from exceptional founder-first accelerators and studios.

At the earliest stages of your entrepreneurial journey, there is support. But who exactly offers it? What does that support look like? Is it the right kind of opportunity for you?

To answer these questions, meet three leaders from exceptional founder-first accelerators and studios: Visible Hands, XX, and Dyrdek Machine. Take a look into their programs and pick up some practical tips on the processes and mentality you will need to fundraise effectively.

Yasmin is a General Partner at Visible Hands, an investment firm with a 14-week full-time fellowship program that supports underrepresented talent in building technology startups by providing company building services and investments of up to $200k.
‍

Gadi is a Partner at XX accelerator program. They modeled their program after Y Combinator's early days. The cohorts are small -- no more than 10 companies -- in order to cultivate a tight knit founder community. You'll hone your product, refine your pitch and iterate at lightning speed... with ongoing support from us and your XX peers. The program is structured around weekly group show & tells, one-on-one office hours with mentors and in-person fireside chat dinners.

Greg is a VP at Dyrdek Machine, a venture creation studio that partners with visionary entrepreneurs. They systematically fuse art, science, and magic to create meaningful businesses that stand the test of time and impact the world. Since launching in 2016, Dyrdek Machine has created 14 brands — 5 have exited for a combined $450M.

In conversation with Propel

What kinds of entrepreneurs do you work with?

Yasmin: We support underrepresented minority founders in tech/ tech-enabled business. We’re sector agnostic. To provide a little bit more color, we're a 14 week program that runs from September through December. In those 14 weeks, we really focus on making sure that the team construction is venture backable (because we're a fund and a fellowship program). So that's the trajectory that our founders are on.

Gadi: XX started first investing in female founders. Now it has grown to investing in very early stage founders that are just getting started, with a ton of potential. We’re industry and geography agnostic! From the last batch, there were two companies from Africa, one from Europe and three from Canada. So, um, it's, it's, it's really international in that sense. In terms of team, we typically only invest in co-founding teams where at least one person is technical. We then help them get focused on the fundamentals and closer to product market fit over 12 weeks.
‍

Greg: Fledgling idea-stage concepts. And by fledgling, I mean, if you have a nugget of an idea, not even a fully fleshed out market thesis, a notion of what you want and how you want to do it, I'm a good starting point.

We will also work with founders that are at that stage, call it pre-seed, where you may be market iterating, testing, validating, getting feedback, and beginning to validate some of those initial hypotheses.

How many entrepreneurs do you support at a time? What does the program experience involve?

Yasmin: We take in 30-50 entrepreneurs each fellowship. During the 14 weeks of the program, there is an outcome around having a really good balance between technical co-founders and those with Go-To-Market skillsets or subject matter expertise. In addition to that, we work on the customer discovery component and make sure that there truly is a market opportunity at the end of the product and really push founders.

Many of them come to their idea and their obsession with a personal stake in it and a lived experience and really pushing them to validate that and test that so that they can speak what I call investor love language. We then work for nine months on introducing fellows who then become founders in the portfolio companies that we're invested in.

Gadi: In terms of scheduling each week, it's pretty pretty hands-off. Ultimately we just don't want to waste founders’ time. We do want them to prioritize building. Core aspects of XX are:

1. On a week to week basis, there are weekly calls with a partner that they're working with.

2. The show-and-tells where founders jump on a call with the rest of the batch and really keep each other accountable.

We transitioned to doing all of this online, for COVID. But the first cohorts that we did were running in San Francisco. We're actually pretty excited to be doing that again in person, because there's just some aspects of getting to be with founders in the same space, in the same room, that are impossible to replicate over a zoom call. We'll see how that goes over the following months.

Greg: The number of entrepreneurs we support at a time is generally anywhere from 2 to 6, give or take. These are intensive, intimate types of relationships where we're really entering more as co-founders in the business.

I wouldn't view us as passive capital. We are heavily involved in every aspect of ideation and conception, product development, brand development & marketing, go-to-market testing, validating, you name it, hiring, coming up with the fundamentals of the capital formation strategy, whether that's raising a ton of money and striving for growth, or thinking more about unit economics and a path to profitability.

In that regard, we don't really have a defined program per se. We have a pretty malleable playbook that we try to equip founders with and then support and supplement them to basically run through all of those initial phases to get to the point where they feel like they've mitigated enough risk to go and speak with people smarter than ourselves, like Yasmin and Gadi.

We'll take board seats if it's amenable, but we're not there to clog up the board room. We're really just there to get you to a point where you can, for lack of better words, almost matriculate or graduate to that next phase. To again, identify partners like Yasmin and Gadi and other later stage investors to really help catalyze and accelerate that next phase.

What does the financial support of your accelerator/ studio involve?

Yasmin: At Visible Hands, we don't believe in what we call ‘ramen entrepreneurship’, where you have to be on a very limited budget. So we provide $25,000 upfront to each fellow. And then we move into that 14 week program. If our two outcomes are satisfied, then we provide a follow on of $150K or $175K depending on the team construction.

So that gets you to a $200K pre-seed. We spend nine months with those who received that all-in investment, introducing them to fortune 1000 executives to help build out customer introductions and strategic partnerships.

Given two of the GPS have capital raising in our background, we introduce founders to investors and help them raise their seed investment.

Gadi: At XX, we invest $70,000 upfront, for 2%. So the valuation at which we're investing is 3.5 million. We've done four batches so far. We're about to start a fifth one. Now we're starting to do cohorts every quarter.

Greg: Initially, we'll commit to writing checks anywhere from $250-500K into those ideas stage companies. We will then establish the legal entity and then go through the process of initial product development, naming brand development, and so on.

Is there a specific framework or piece of advice you would offer to a founder thinking through if and when VC funding is right for them?

Gadi: I have two very specific things that come to mind. One is that a lot of founders confuse their own success with how successful their conversations with investors are going. And that's a huge mistake that ultimately demotivates founders. Many times, it's a leading factor to them giving up.

When you're talking to investors, make sure that you understand that they only talk to you for like 30 minutes and they really have no clue about what your business is doing when they compare their own knowledge with yours.You live and breathe that every single day. So make sure you actually don't take an investor's thoughts as fundamental truth. It's always, almost, always not true.

The second point of advice is, because of that same thing, fundraising is not a metric for success in how your business is performing. Just make sure you're doing it only when it's the right time. And don't try doing it to prove to yourself or the rest of the world that you can actually raise money. Just try raising money when money is like the only solution for you to grow even faster. Many times you can figure out ways without diluting your own equity or going to investors, to grow - like talking to customers. Just try making sure that every single time you go into that fundraising mode is because you're about to already hit a wall. And capital is the only solution to go through it.

The other thing that Gadi mentioned around fundraising is the feedback. I also think in your tracker that you categorize the feedback so that you can see if this is one person's perspective, one time, or if you're seeing it come up often. If it's coming up often, then you want to go out to your advisors and tease through what the feedback is. Remember there's advice. And then there's good advice. And it's on you to know the difference, not, not the investor.

The second point is knowing the different types of capital available to you. If you already have revenue, you may want to start with revenue base capital. If you think, you know, debt might be the better instrument then understand that, because once you're clogging up the cap table, as Greg said, it really has upstream ramifications.

If you're a cap table, it looks a certain way. You may be eliminating potential investors in the future. And who is on your cap table can also either create some fundraising FOMO, or it can mean that certain people don't like to follow certain people, which has nothing to do with how good of an operator you are.

Greg: You're the expert. Don't let VCs tell you otherwise. We're here to poke and ask questions. Not because we're necessarily challenging you, but because we're curious to learn. And you're the one who has that information.

Taking money from someone who doesn't necessarily know, isn't a bad thing if you are equipping yourself with other smart people, internally, like advisors, or you straight up have that domain or functional expertise.

If you're convinced you need venture capital, are you talking to a partner in GP like Yasmin or are you speaking with an analyst? Those are different conversations. Never overlook a conversation with an analyst. That's where quality deal flow can come from. Yasmin, she's doing a million different things. She's doing panels, she's blogging. She's raising a family. She won’t have time to source thousands of deals. That's what analysts are for. So never diminish the relationship with an analyst because those are critical. For lack of better words, analysts are the champions at that fund who can go to bat on your behalf.
‍

Want to dive deeper into the conversation? Access the event replay here.

Special thanks to Propel member Sumia Shaikh for introducing us to Yasmin and helping to make this an invaluable session.

Great, You're in 🎉! The next edition is on your way!
Oops! Something went wrong while submitting the form.
Learn more about propel→
Accelerators 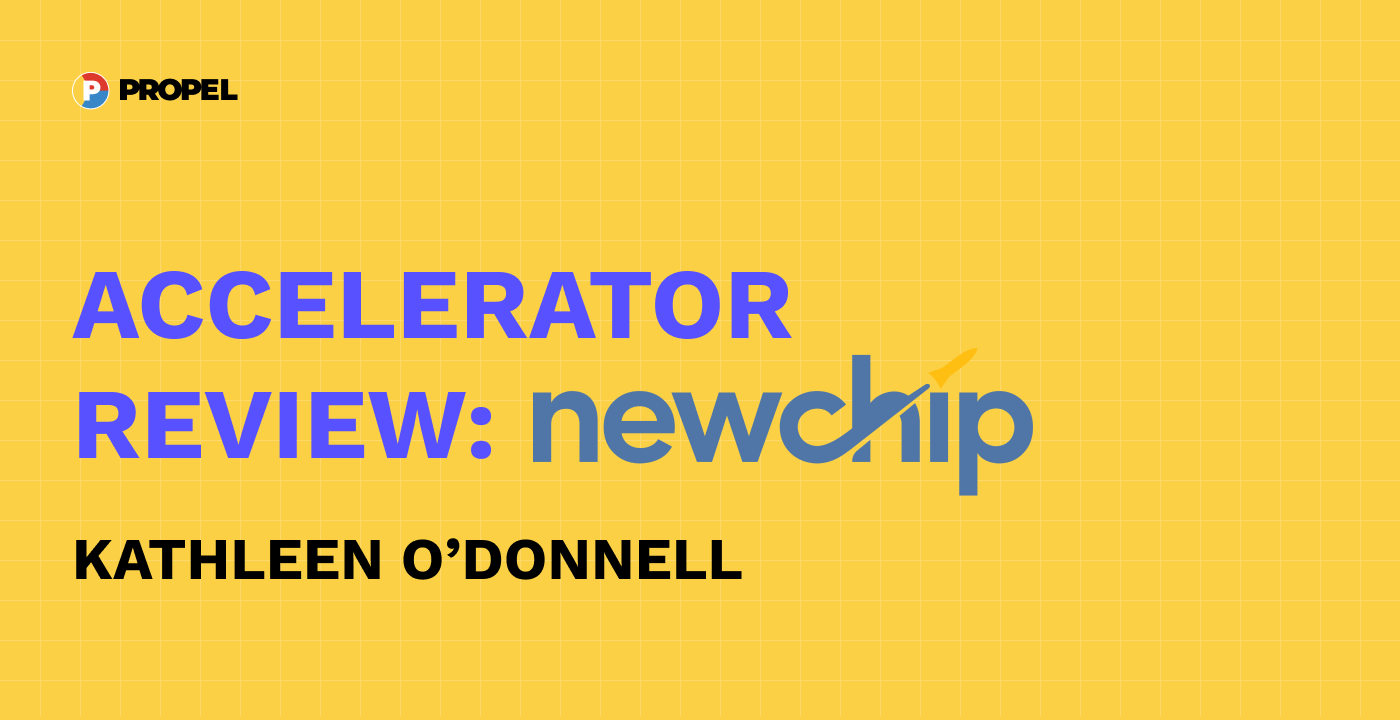 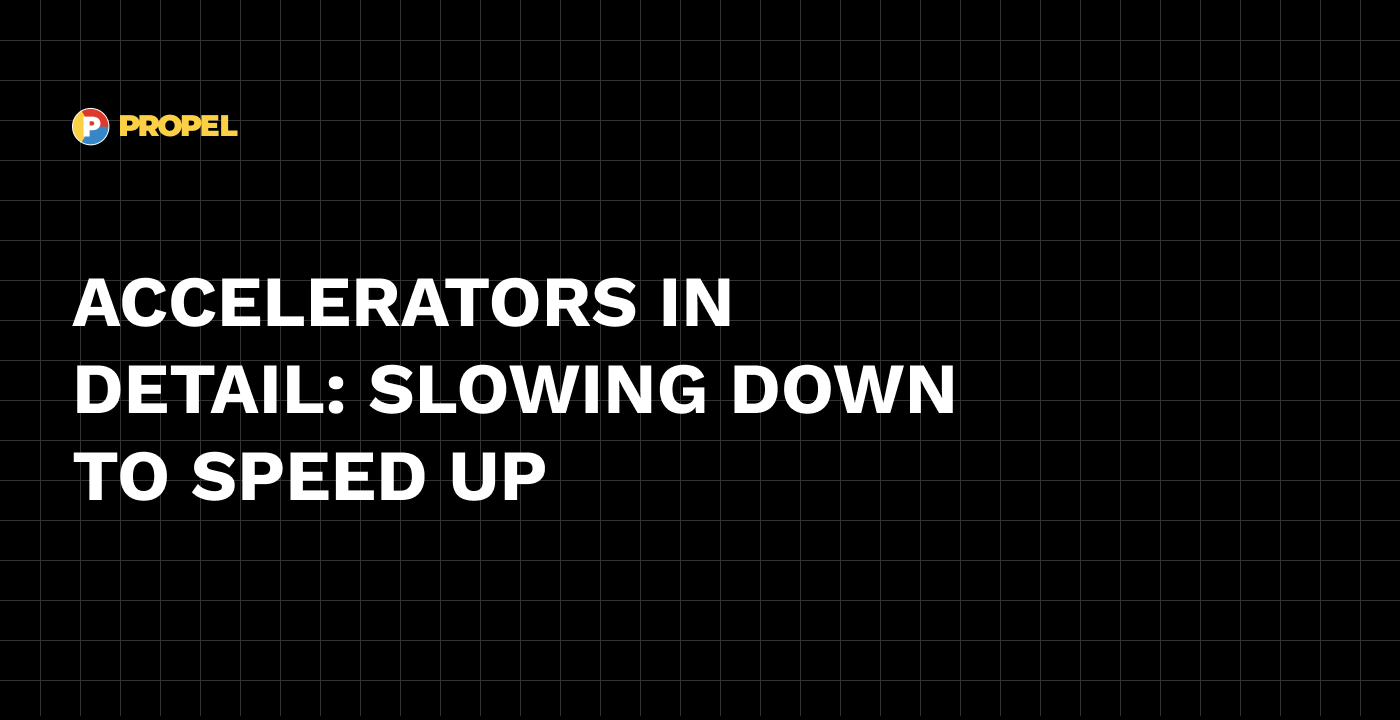 Accelerators in detail: slowing down to speed up 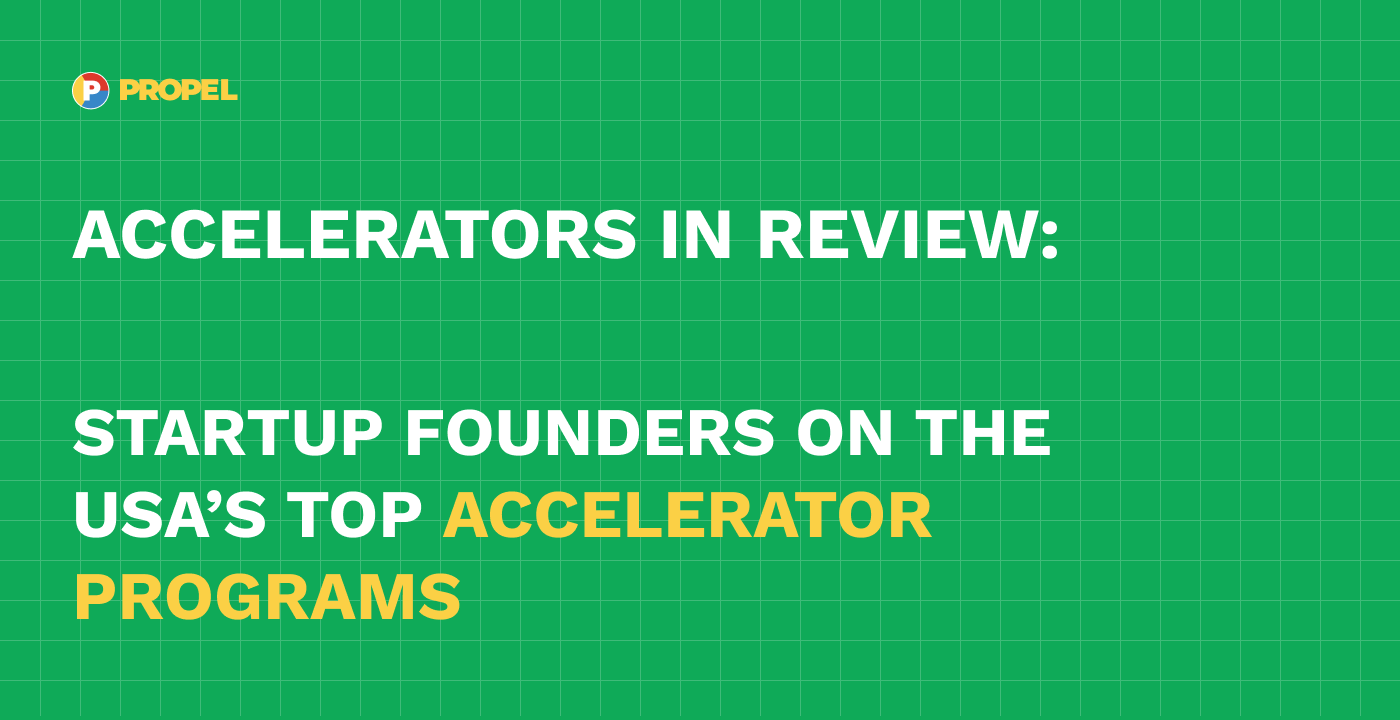